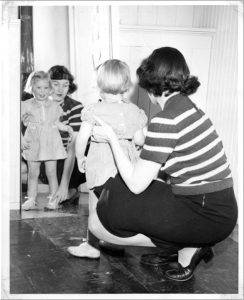 The Junior League of Grand Rapids is an outgrowth of the Butterfly Guild of Butterworth Hospital, started in 1903. The activities were suspended during World War I, but resumed in 1920, and in 1922 with Mrs. Earle A. Clements, President, plans were started requesting membership in the A.J.L.A. Five thousand dollars in the Treasury were turned over to Butterworth Hospital and a Maternity Fund was created in the name of the Butterfly Guild.

In January 1925, the Guild was formally accepted by the A.J.L.A. and our Maternity Fund at Butterworth was henceforth to be called the Butterworth Maternity Fund of the Junior League. In 1926 our League was Incorporated, the papers being signed by Mrs. Earle A. Clements, Mrs. William B. Steele and Miss Josephine Bender.  One of our most influential members was former First Lady Betty Bloomer Ford.  JLGR is part of the Association of Junior Leagues International which has over 150,000 women in 292 Leagues spread across 4 countries.